I made a trip to my local grocery last week when I couldn’t make it to the farmer’s market and surprisingly, vegetables were not horribly overpriced. In fact, most of the veggies I wanted were on sale. I bought up a giant bagful, came home to peruse my cookbooks, and picked out a bunch of recipes that sounded awesome.  Today’s post will only be the half of it.

This vegan marshmallow was amazing. An online pal of mine suggested that I toast one of these and since I did it the first time, I have been toasting one per day ever since. Thanks Jenn! 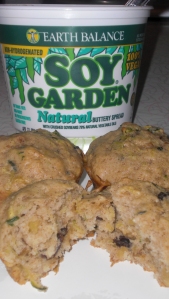 I got a new cook book called “How it All Vegan.” Stupid play on words aside, it’s not bad. Although, they do talk about how eating bee pollen is good for you and that you should thank the bees when you do it. That’s a little odd to me but whatever. I actually had to look through all my cookbooks for an acceptable zucchini muffin recipe and all I found was their zucchini bread, so I made it into muffins. Like it’s real hard, right? The muffins were amazing. I used that delicious soy butter to shmear all over them.

I also got a bit of bad news this week so I decided that I needed chocolate desperately. I whipped out my “Vegan Cupcakes Take Over the World” book and made cupcakes out of some Oreo’s. I don’t like Oreo’s but I like cupcakes so these hit the spot in my tummy that was in need of sugary goodness. 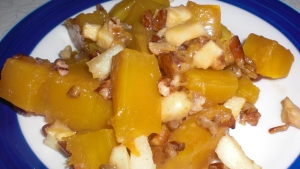 And last but certainly not least, I made this amazing squash with apples and pecans. I ate it for days. It was so delicious, I didn’t even need to eat it with anything. This one is from “Vegan Planet,” so here’s the recipe:

One large winter squash (I used butternut) peeled, seeded, and cut into one inch cubes

One small yellow onion (I omitted this since I hate onion, but a sweet vidalia would probably go well)

1/3 cup brandy (for my straight edge friends, I think possibly apple or white grape juice would sub just as well)

Preheat oven to 400 degrees. Place squash in oiled pan large enough to fit all of squash into one layer. Sprinkle onion over the top. Pour on the brandy. Add one Tbsp of olive oil, one Tbsp of brown sugar and the water. Season with salt and pepper to taste. Seal with foil and bake for 40 minutes, turning once after 20. Uncover and remove from oven.

In a bowl combine pecans, apples, remaining olive oil, and remaining brown sugar. Sprinkle over squash. Place in oven and bake for another 15 minutes. Remove from oven. Eat it.