Picture me saying  this as though I were a zombie. Only instead of “braiiiiiins…” you have…well, you get the idea. I’m pressed for time with finals but here are some pictures of food I’ve made recently. I also don’t have time to write down these recipes but if you email me, I will get them to you because I’m not a jerk. 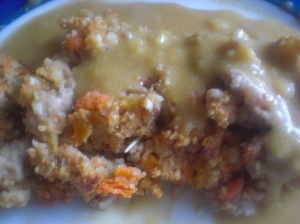 This was a truly heavenly dish I lovingly giggle about while calling it my world-famous “nut loaf.” Its main ingredients are bread crumbs, carrots, onions, and cashews with a delicious filling of pureed chestnuts. You bake it the way you would bake a banana bread, in a loaf pan. I also made a wonderfully creamy and rich veggie gravy. Throw some mashed potatoes on there and you’ve got one hearty meal even a lumberjack won’t bitch about.

This was so delicious, words cannot even describe. I’ve never been a huge fan of mock meats but I don’t just want to eat a pile o’vegetables either. I made my own seitan using a modified version of the one in Veganomicon then sauteed it with some Mongolian stir-fry sauce and added a little extra crushed red pepper. I like spicy, maybe you’ve noticed. I served it on top of some Israeli couscous, which is larger than regular couscous. I just like saying couscous. Couscous, whee!! Ahem, the couscous was tossed with fresh basil, toasted walnuts, and lightly browned garlic. Mmmm… 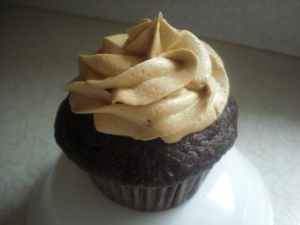 These were the most amazing treats. I am a huge lover of all things coffee-flavored so when I heard that Starbucks was coming out with their own line of instant coffee called VIA, all I could think was, “Hm, how can I put THAT in a cupcake?” For this, I basically made the chocolate cupcakes from Vegan Cupcakes Take Over The World and dissolved a packet of VIA in the soymilk/apple cider vinegar mixture. For added buzzed-up fun, I put one tablespoon of coffee grounds in the dry ingredients, too. Lucky for me, one of my BFFs works at a Starbucks in Nashville and I still had some of the coffee left over that she sent me for my birthday. Next, I made regular old buttercream but instead of using one or two tablespoons of regular soymilk to soak up some of that powdered sugar, I dissolved another packet of VIA into the soymilk. Heaven with a capital V. Seriously.

If you want to read about VIA cupcakes on a much cooler blog, go here. This is my friend’s site who made her own recipe a couple months back.

This was somewhat of a pain in the ass to make but you know what? It was well worth it. I just had to do a whole lot of pureeing before I could assemble the damn loaf, and my two-year-old is scared to death of anything that makes a loud obnoxious noise so… you know… there was lot of pausing to comfort and console.

I took this recipe from The Compassionate Cook and made it my own, which is usually what I do with everything I cook because so many recipes have onions in them and I hate onions, dammit. Well, mostly I hate onions. I can eat Vidalia and Cipollinis if they’re cooked until they’re mush but that’s about it. Please enjoy!

Here’s what you need:

4 cloves garlic, minced (or more, if you’re me)

1 cup carrot puree (you know, boil til soft, then puree. Or mash. That would work also.)

3/4 cup bread crumbs (Trader Joe’s has organic bread crumbs! I found that out last night! Woot! However, if ya wanna go gluten free, make your own bread crumbs with a couple of dried up old heels from a loaf of gluten-free bread)

Heat the oil in a fry pan, then toss in your garlic. Only cook for about 2 minutes, until the garlic becomes fragrant, otherwise it will burn and become bitter. While the garlic is cooking, place into a large bowl the cashews, carrots, bread crumbs, half of the salt, and veggie broth. Mix well, then add in the garlic and olive oil.

In a small mixing bowl, mix the flour with the water until a smooth paste forms. Use a little more water if necessary. Add to the cashew mixture. Mix well.

Mix the other half of the salt with the chestnut puree.

Spoon half the cashew mixture in the bottom of your loaf pan that has been sprayed with non-stick cooking spray. Make what looks like a shallow grave. Spoon the chestnut mixture into the shallow grave, being careful the chestnuts do not touch the sides of your pan. Place the rest of the cashew mixture on top and press down lightly so you can’t see the chestnut stuff. You want this to look like a nice uniform loaf. (Another name for this roast would be Chestnut Surprise.)  Bake for 45 minutes to an hour, depending on your oven and whether you are using a glass or metal pan. You’re not an idiot, right? Just make sure it’s brown on top, the let it cool for about 15 minutes.

**Two side notes: 1) I’ve actually made this without the chestnut stuff inside back in the day when I couldn’t find chestnuts to save my life. You basically skip the layering step, so instead of a surprise inside, you get nothing. Plus, the loaf is a tad bit smaller but so what, really. Still delicious!  2) If you want to, you can chop one medium-sized onion,  toss it in the oil until soft, THEN add the garlic and proceed.

While it’s cooling, make this yummy gravy! You will need:

2 cups of vegetable stock or broth

salt and pepper to taste

In a sauce pan, whisk together first 6 ingredients over high heat. When it begins to boil, pour in starch/ water mixture. Let come back to a boil, then boil for about one minute, or until thickened. Done!

I served mine with mashed potatoes and corn. It looks like a meatloaf so you can even make sandwiches the next day for lunch if you want to.